Aged 18 Henry was working with his father as “Rope Makers” in Leasingham, Lincolnshire, (1881 Census, RG 11/3222), an occupation Henry continued for the rest of his life.

From their birthdates of their children it seems likely that their family moved to live at Cley Hill, Ruskington, about 1887 (1891 Census, RG 12/2577). 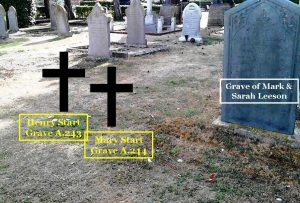 Location of Graves of Henry and Mary Start in Ruskington Cemetery

Unfortunately, neither grave is marked by a headstone, but their relative location is shown in the photo (left) marked by the superimposed crosses.

[N.B. Their graves are found to the left (south) of the Leeson family grave.] 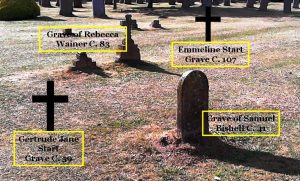 Like their parents, neither infant’s grave is marked by a headstone and their approximate locations are shown by the black crosses in the photo above right.

N.B. In the interests of privacy this family genealogy will not look into family details beyond the First World War, where several members served with distinction, including making the Supreme Sacrifice.

Private 55537 Frederick Henry Start: was born in the March quarter 1886, in Leasingham, Lincolnshire. He moved with his family to Ruskington and was enumerated with them in 1891 and 1901. The Census of 1911 (RG RG14/19617) shows him living at Skin Yard, Dorrington, along with his sister Minnie and her husband Robert (see below).

Frederick enlisted in the Lincolnshire Yeomanry (Household Cavalry and Cavalry of the Line) at Lincoln around the middle of December 1914. He was posted to Egypt on 21 November 1915 and was engaged in the Battles of Gaza.

He paid the Supreme Sacrifice when he died of pneumonia at the 74th Casualty Clearing Station, Palestine, on 13 December 1918. He now rests in Gaza in the Deir El Belah War Cemetery. Grave: B.139.

Private 10768 Samuel William START: was born in the March quarter 1890. He lived in the parental home until he enlisted with the 6th Battalion. Lincolnshire Regiment. Like brother Frederick, he too was posted to The Balkans on 18 July 1915 and took part in the Battle of Chocolate Hill.

Samuel survived the War and was discharged on 15 March 1919. He began working as a “Groom”, living and working at Cranwell, Lincolnshire. However, he died on 17 April 1919, aged just 29, and just a month after his discharge. 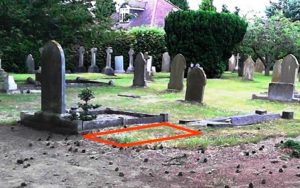 Samuel’s Death Certificate shows that at an inquest held on 19 April the Coroner, Edward Cragg, recorded that the cause of death was: “Accidentally thrown from his horse and the horse falling upon him, he died.”. He was buried on the 21st April and now lies in Grave A 300, Section A, Ruskington Cemetery, Old Plot.

His Grave has no headstone or marker, but its location – just to the left (north) of the village War Memorial – is shown in the photo (above).

Private 2179 Charles START was born in the December quarter 1893. The 1911 Census shows he was working as an ‘Assistant Rope Maker’ – presumably to his Father. He served with the Brigade Staff of  the 1/1st Battalion, Lincolnshire Yeomanry. He later transferred – Pt. 150146 Machine Gun Corps – and served until 2 April 1919.

Charles’ Service Number is adjacent to his brother Fred’s original number. His Service would, therefore, have mirrored that described on his brother’s page on the “Ruskington War Memorials” site – see: Private 55537 Frederick Henry Start. [See, also above.]

Nothing has yet been found to confirm Charles’ later life, marriage, children or ultimate death. However, a family history website states that in 1920 he married Edith Dorothy Webster, at St Mark’s Church, Lincoln. However, this was Harry Charles, born in 1896. 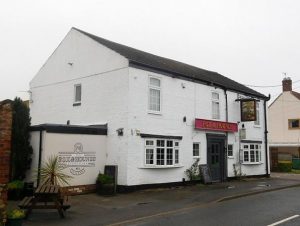 The 1939 Register shows him as ‘Charles H.’, working as a “Plant Labourer” and living with Edith at The Fox and Hounds Inn, Reepham, Lincolnshire.

This Charles’ date of birth is recorded as 27 September 1894. This Charles Henry Start died on 8 May 1941, aged 45, and is buried in St. Peter and St. Paul Churchyard, Reepham, Lincolnshire.

Private M/303833 Emanuel Frank START was born on 9 January 1899 and seems to have lived at home until he enlisted in the Royal Army Service Corps, presumably, in view of his age, late on in the Great War.

They went to live in Hull when Herbert was about 3 (c. 1929), living at 9 Alfred’s Terrace, and Frank was employed as a ‘Motor Engineer‘.

Five members of the Start family are buried in Ruskington Cemetery, parents, Henry and Mary; two daughters who died in infancy and a son accidentally killed in 1919 – as detailed above. One other son lies in a Commonwealth War Grave in Gaza.

The family lives of two other sons, Charles and Emanuel, who returned safely from the Great War have also been detailed briefly above.

There remains, however, five more daughters who grew up in and around Ruskington village, but later moved on to establish their own lives and families:

Edith Mary Start – According to Census returns, the oldest child was born in  Nottingham (Carrington) in 1881 (possibly 25 October) – probably as “Edith Mary Edwards“.

Emily moved into domestic service in Manchester, and the 1901 Census shows her working as a “General Domestic Servant” to Ellis (Managing Director – Cotton Goods) and Josephine Smith at 8 Athol Road, Withington.

On 17 April 1904 she married Robert Henry Bembridge (Horse Keeper) at St Matthew’s Church, Ardwick (left). He was the son of William Henry and Hannah (née Woodhouse) Bembridge and lived in the area.

They set up home at 20 Richmond Street (Marriage Certificate). When daughter, Ethel, was born on 26 March 1905, they had moved to 9 Bunyon Street (St Matthew’s Church Parish Register), and Robert was working as a “Van Driver“.

By the time of the 1911 Census (RG14/19749) the family had moved again, to 48 Mill Road, Lincoln, and Robert had returned to his old job as “Groom“. There is no record of any other child(ren) being born to the family.

The 1939 Return (Reference: RG 101/ 5882D) shows that the family had improved their social standing. Edith was working as an “Elementary School Teacher” and living at 25 Wycliffe Road, Alfreton, Derbyshire, with husband Robert Henry (Colliery Deputy).

Edith died on 11 March 1955 in Lincoln, possibly at 7 Drury Lane. Robert lived until 6 November 1962 when he died in a Care Home at Needleham, Welton, Lincolnshire.

Minnie Rebecca Start – the second child of the family was born in Leasingham, Lincolnshire, on 4 December 1883 and moved with the family to Cley Hill, Ruskington where she stayed until her marriage.

Robert was a “Groom“, born on 25 December 1876, in Dorrington, and the oldest son of John Wright (Greengrocer) and Sarah Jane (née Edwards) Elkington.

In 1939 (RG 101/6388I) the family were living at the “Musicians Arms” Public House, Dorrington. Robert and Rose were working on the land, and Minnie was engaged in “Household duties“.

Ethel Mary Start – was born in Ruskington on 9 April 1892, the year after her sister, Gertrude Jane, died, aged 3 (see above). She was living at home with her family in 1911 and employed as a “News Agent“.

Florence Annie Start – was born on 4 December 1896, in Ruskington, and the two following Censuses show her, not surprisingly, living in the family home.

There is no record that Florence ever married and she died in the March quarter 1945, also in Hull, Yorkshire.

Kathleen Start – was the youngest (known) child of the family, born in Ruskington in the June quarter 1902 (possibly 9 May). Her life after the 1911 Census, where as a 9 year old she was still at home, is somewhat speculative.

In the December quarter 1921 a Kathleen Start married Herbert Hartley in Hull. The 1939 Return (RG 101/266J) shows “Kathleen Hartley“, born on 9 May 1902, working as a “Stenographer At Wireless Manufacturer” living at 66 Regina Road, Islington, London, N4. Although living alone at that address she is designated as ‘Married‘. Strangely, at a later dater date, on this record, ‘Kathleen‘ has been crossed through and substituted by ‘Hilda K.‘.

This page celebrates the special contribution this family made the Great War by service and sacrifice. One of the bravest Ruskington families.