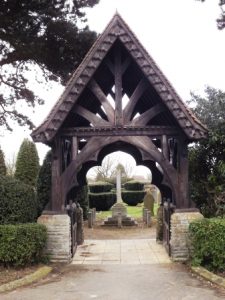 In 1882 Ruskington Parish Council decided to purchase land in Sleaford Road for a new cemetery for the Parish, and this is still in use, though today (2017) is almost full, with approximately only 4 years left for Burials from the village.

At the time the new site was chosen it lay about 250 m. South of the village, with plenty of land around it, but is now fully incorporated in the built-up area, so it is impossible to expand.

A new Cemetery site for the village is currently being sought [2017].

The original Cemetery has, for this site, been labelled the “Old Plot”. Towards the end of the 1930s it was extended into the “New Plot” to the east. [Both Plots also have a ‘North’, ‘South’, ‘East’ and ‘West’ Border.] 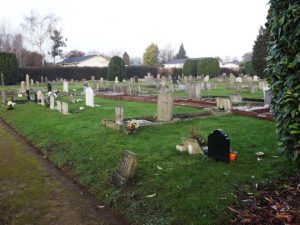 The layout of the ‘New Plot’ is shown on the adapted O.S. Map extract below and is largely an extension of the ‘Old Plot’ symmetrical pattern, although the New Plot is considerably larger (longer, west to east).

Its East Border is rather more haphazard and seems to have been extended in piecemeal lots as land as been obtained at the rear:

Scroll down for more information about each of these areas:

At the foot of this page are details of how to access spreadsheets to search who is buried and commemorated in the ‘New Plot’. There is also details of accessing a composite plan of where each grave site is located within the Cemetery.

Orientation: All burials are oriented in a general west->east direction, i.e. with the headstone at the west end of the individual grave plot, and the feet of the interred to the east. [‘General‘ as the overall Cemetery orientation is more WSW –> ENE, rather than a true West –> East!]

Since Medieval times this has been the traditional positioning for Christian burials with the head to the west and the feet pointing east. The most common explanation for this was recorded by the Augustinian monk, John Mirk, in the 15th Century – that Christ will return from the East on the Day of Judgement and the dead will rise towards him: ” For as the lightning comes from the east and flashes to the west, so also will the coming of the Son of Man be. ” (Matthew 24:27)

Water Table: Because of the high water table in this area most of the burials in Ruskington Cemetery are single depth, i.e. contain only one burial. This has tended to mean that many families often had the foresight to purchase side-by-side plots, hence there can sometimes be a large time difference between adjacent burials. 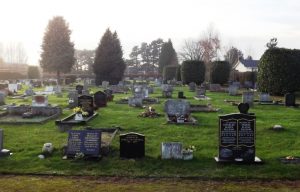 In late 1930 this Plot was opened, beyond the original Eastern boundary of the 1 acre (about 4050 sq. m.) “Old Plot” site, now marked by a hedge, with access points to the North and South.

The first burial in the ‘New Plot’ was that of 70 years old Charles Herbert Faulkner on 25 November 1930, Plot D, Grave 1, in the South-east corner of the Section.

The photo (above right) shows Plot D, looking from the back of the site. Note the more recent cremation burials bordering the path. Grave numbering is along rows beginning in the SW corner and ending in the NE corner of the Plot.

The original plan for this plot shows a layout of 27 Rows, each 15 Graves wide, i.e. 405 Graves. However, from about 1940, when the 7th Row in was reached, the decision was taken to add a further grave space on the North side, meaning Rows 7 – 27 are 16 Graves wide. The whole of Plot D, therefore, accommodates a potential 426 graves. There are more burials and commemorations than this, however, as some graves are double depth and many others also contain cremated remains of family members.

The burials in Plot D peter out in the early 1970s, although, as with all other Plots in the Cemetery, there are later burials as families exercised their option of pre-buying adjacent grave plots. 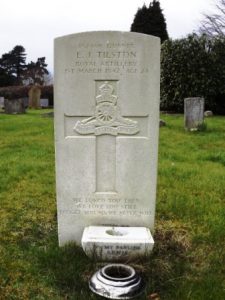 Grave D.101, Gunner Ernest George Tilston, is the only Grave in the whole Cemetery to bear a Commonwealth War Grave Commission headstone.

Although born in London and at the time of his death in 1942 of ‘war related injuries’, the UK Army Roll of Honour, 1939-1945, records that Ernest (and Lucy) were living in Hertfordshire.

Ernest’s wife, Lucy Ann (née Blades) was born in Ruskington, so presumably she or her parents arranged for his burial in the village Cemetery after his death.

CLICK on Ernest’s name, above, to go our sister site, Ruskington War Memorials, for more details of his service.

Virtually a mirror image of Plot D, separated by the central access path, Plot E, however, does have more grave sites and the plan shows a potential 452 plots, all oriented on a broadly west –> east axis.

The West side, possibly with the intention of extending the children’s grave area from the Old Plot C on the other side of the border hedge has 3 rows, 21 graves wide. There then follows 389 full sized burial plots. [As with Section D, above, there are more than this in actual commemorations etc.].

The other, larger portion, to the East, has 25 rows, each 16 or 17 graves wide – similar to the initial pattern of Plot D.

Burials in this section also follow the ‘New Plot’ model, commencing in the South-west corner and progressing towards the North-east corner at the rear of Plot E.

It is likely that the Graves now numbered 1 – 17 in Row 4 were still being reserved for child burials. The first such infant internment was that of 5 month old Derrick Samuel Castledine on 1 April 1931, in Grave 1 of the children’s section (South-west corner). 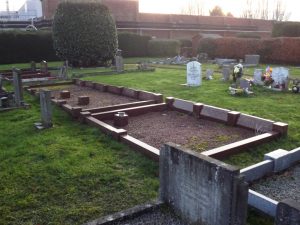 The custom of purchasing adjacent grave plots is in evidence all over Ruskington Cemetery. However, the Turner family went much further, purchasing 9 gave sites for what appears to be two branches of the family. These can be found about 3 rows in from the western edge of Plot E, Graves 7 – 15.

However, as with all Plots many further internments took place in Section E as families took up their pre-purchased sites, or added cremation remains to burial plots. 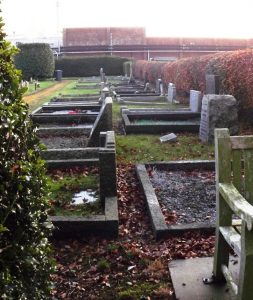 According to the Cemetery Plan, the West Border is contained by the boundary hedge with the ‘Old Plot’ and an access path and contains 64 grave sites, arranged in 2 rows, 2 graves deep.

The Plot currently (2017) contains 83 burial and cremation remains as some grave sites contain more than one family member.

The photograph (right) shows the size of some of these headstones indicates some significant family burials. 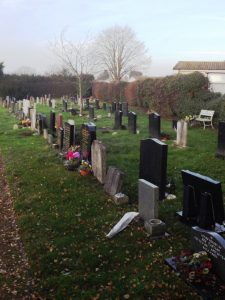 The Cemetery Plan shows the East Border as the furthest section from the entrance, on the extreme eastern border.

It is bordered between an access path and the boundary hedge and contains 108 grave sites, in a triangular shape, widening to the North. In addition there are a further 12 smaller areas set aside for the burial of cremation remains.

As shown in the photograph on the right, there are now more recent cremation burials found behind the headstones, in the spaces bordering the path.

The earliest graves in this Section date from the mid 1950s but this could have resulted from the area to the north being initially seen as an extension of the North Border. After a gap of about 10 years, burials began again and continued until the early 2000s. Later areas were opened to allow cremation remains to be interred. 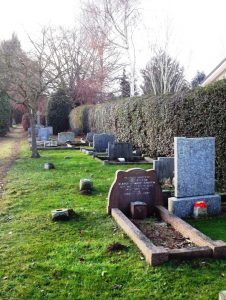 The North Border contains 128 potential grave sites, in 31 rows, 4 graves wide. As with other Plots the West Border ‘faces’ East.

It is bordered to the North by the boundary hedge between the Cemetery and adjacent housing, and an access path between the North Border and Plot D.

The earliest burial in this area was on 4 February 1933 when Francis Cock, aged 73, was buried in Grave 1. Just 1 week later, on the 11th, his wife, Ellen Louisa, was buried alongside him.

In fact, the first row of 4 graves are occupied by the Cock(s) family. The cremated remains of their son, Albert, who died on 27 March 1969, also occupy Grave 2, and his wife, Mary Dorothy (née Tyler) joined him after she died, aged 102, in September 2003. Their son, Albert, and his wife are also found in this Row.

In general, though, the range of burials in the North Border go on until the mid 1960s, although, as with all other Sections – as seen above – later burials took place in purchased plots. 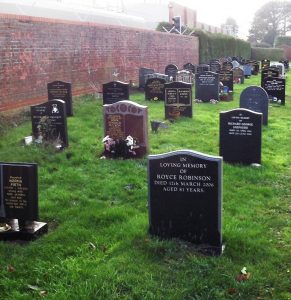 This is the only area of the Cemetery which is currently accepting new burials. It has been estimated that the Cemetery will be declared ‘full’ in about 4-5 years.

The Plan shows a potential of 106 burials, which began at its furthest point (SE corner). The 28 rows are arranged 4 deep across the area. 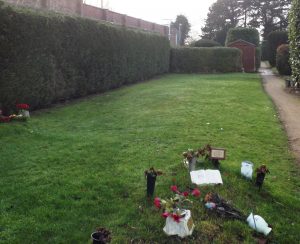 The photograph on the left is the only remaining unassigned space left in Ruskington Cemetery. In the 16 years since 2001 the South Border has received 78 burials.

As there are currently [July 2018] 21 burial plots available, at the current rate this Section will be full inside 5 years.

However, the Parish Council has plans to create an additional 30+ plots by reconfiguring parts of the Cemetery layout.

A list of Burials in Ruskington Cemetery ‘New Plot’ has been prepared by analysing and listing the entries in the Parish Burial Registers (2 and 3):

…….. find where the Graves are located in Cemetery by studying this Plan of the whole of the ‘New Plot’ area

…….. have a look at a list of the Cremation Burials in the New Plot.

…….. find where the Cremation Burials are located in the Cemetery by studying this Plan of the Old and New Plot areas.