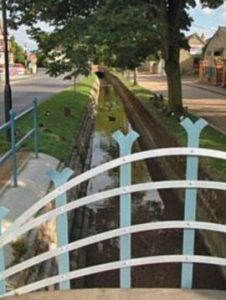 According to the Office of National Statistics at the last [2011] Census the village of Ruskington, near Sleaford, Lincolnshire, had a total population of 5,637, living in 2,479 households – an average of just 2.3 persons per household.

Ruskington is the largest village in Lincolnshire, by population, with much of its latter day growth due to attracting incomers, including people who have chosen to retire here.

The population grew significantly in the 1980s as planning approval was given for the addition of several hundred houses. 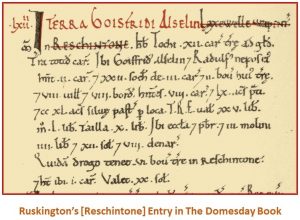 The village dates back to pre-Domesday times and Ruskington All Saints is a Norman church, built in 1086 to replace the earlier wooden Anglo-Saxon church on the site.

Although part of the tower masonry survives the Church was rebuilt in 1620 after damage in 1618 when the spire collapse.

Under the stewardship of Rev. Arthur Myers much of the body of the Church was rebuilt in the 1880s.

See below to read more of the village history and also an account by Rev. Myers of his experiences.

At the time of the Domesday Survey [reference above left] the village was recorded as “Rischintone” (“farmstead where rushes grow“) and had a population of 39 households (very large for its time), made up of 8 villagers, 8 smallholders, 22 freemen and 1 priest. [The name comes from the  Old English ‘ryscen‘, with the Scandinavian –sk– + tūn.] 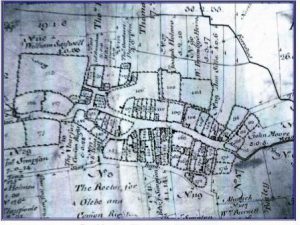 The sketch map of the village (right) shows a typical Medieval pattern, often found with ‘strips’ of farming land behind each residential property.

This possibly explains why, in early Census returns, men described as “Farmers”  were often living along the High Street, with their farms behind the properties.

[You can read more about this type of farming pattern most noticeable these days in the village of Chelmorten, Derbyshire.]

Ruskington railway station opened in 1882 as part of the Great Northern and Great Eastern Joint Railway between Sleaford and Lincoln. The railway closed in 1961 but was reopened in 1975.

The opening of the railway coincided with the opening of Ruskington’s Communal Cemetery in 1883 to replace the Churchyard as the village’s burial ground. This site details the burials in each location, either side of this significant date. 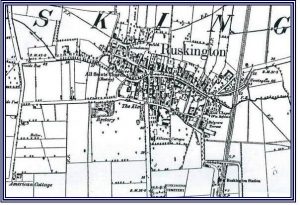 A map of the village, taken from the Ordnance Survey series “Partially revised 1912/13“, shows a linear village form, either side of the Beck, splitting the High Street in its ‘North‘ and ‘South‘ Sides, and with the Parish Church at one end.

This map shows the railway, its station and the location of the Church and the Cemetery.

Various streets led off from this main road, but certainly not to the extent found today. [See: “Ruskington Parish Council Map“]

The two graphs below show how the village had grown during the 19th and early 20th Centuries, from just 483 persons in 1801 to nearly three times that in 1911 – though the population had ‘levelled off’ over the previous 30 years.

The second graph shows the Population Structure in 1911, i.e. the proportion of males to females in each age group. [Demographers would call this a typical ‘Expanding Pyramid’, with a larger proportion of the people in the younger age groups.]