A pagan Anglo-Saxon burial ground, with some Roman remains has been known to exist for nearly 150 years on the western outskirts of the village – outlined in green on the map below.

As the village expanded and new homes were constructed, a number of other significant finds have been located, as shown on the map. This has been adapted from ‘An Archaeological Survey of Ruskington’, published in 1995 [see: Sources below]. 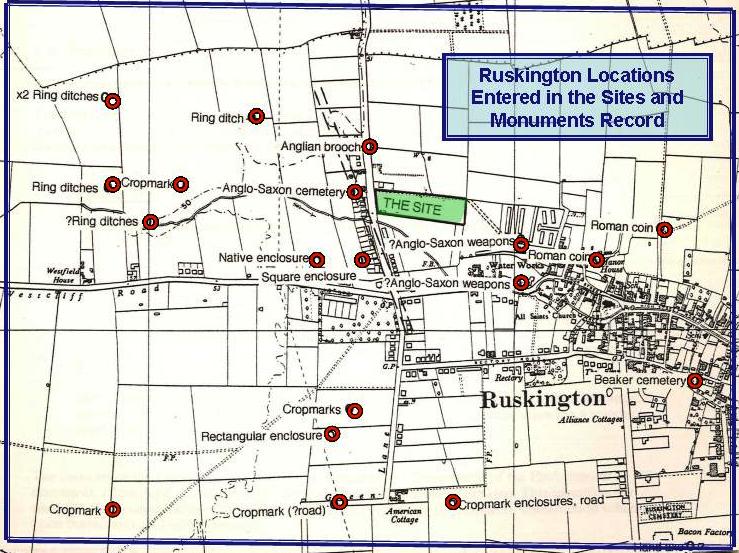 Trollope (see Source ref. below) records that two skeletons were found during gravel digging in 1871 in an area about 20 yards(18.3 m.) NE of the old windmill. One of the skeletons was interred with an iron socketed spear head which still retained some of its ash handle and was ‘undoubtedly of Saxon make’. He also mentions that numerous human bones had been found previously in the area.

In 1917, Dr Gibson obtained a collection of Anglo-Saxon items from a local farmer who had found them in a nearby gravel pit. These items were donated to Grantham Museum in 1951 following Dr Gibson’s death. A skull from the site is also mentioned in correspondence, although this was in poor condition and its current location is unknown.

In 1936, four skeletons with grave goods were found by Mr Smith, a chemist from Sleaford, in the garden of No. 1 bungalow. Also in 1936, a large group of artefacts was found during building operations and presented to Lincoln Museum by the contractor, Wallhead.

These items were associated with two rows of burials. An urn with an inhumation burial was also found by the same contractors in 1938, and was also donated to the museum. [More details on: “Remains and Artefacts” page.]

Also around 1935-37, Ron Hossack carried out extensive investigations during the digging of pipe trenches for the new bungalows. He recovered a large number of artefacts which were kept in a private collection for many years and some items went missing during this time. The collection was donated to the Lincoln Museum in 1979, and some of the missing items were recovered.

In 1941-42, the resident of the bungalow closest to Mill House uncovered a number of burials with grave goods in his back garden. Further burials were also found in the adjacent garden. The finds were donated to Lincoln Museum in 1956.

In 1942 and 1945 more bungalows were constructed and nine more graves were discovered during this work, some with grave goods including swastika and ring brooches. A cremation may also have been found in 1945. The location of the finds is not known.

Two burials were disturbed during building work at 85 Lincoln Road in 1957, and a cruciform brooch was found. The skulls of the burials and the brooch were removed but the rest of the skeletons were left in situ. One of them was found again during the 1977-78 excavations. 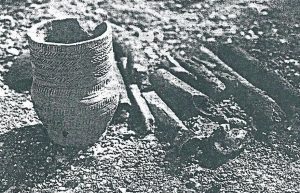 Part of the site was excavated in 1975 in advance of building works at the Chestnut Retirement Home. Twenty-four inhumations and three cremations were uncovered as well as grave goods.

Further rescue excavations were carried out in 1977-78. Fourteen inhumations and a possible cremation were found.

A number of other casual finds of grave goods, mostly brooches and spearheads, are also known from this site. [More details on: “Remains and Artefacts” page.]

A watching brief was carried out during the construction of a house on part of the site in 1985. Six burials were uncovered. A shield boss and several pottery sherds were also found in the graves. Examination of the edge of the trenches indicated that further burials remained in the area of the new house and driveway.

……. about the Human Remains and artefacts found in Ruskington