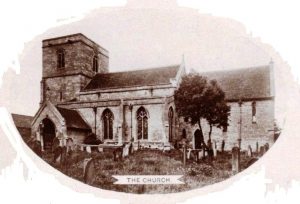 According to a mounted scroll inside the Church:

“Records show that a small Saxon Church, probably constructed of timber, was built in 1086. at the end of the 12th Century a more substantial Norman structure was replaced by yet another on the present site.

The small lancet windows low down on the North and South Walls of the Chancel still remain.

Features of the 12th Century building are the South doorway and an exceptionally fine pillar in the Arcade of the Nave. The broad circular base and dog tooth ornamentation can be seen from the Children’s Chapel.

During the 13th Century the North Arcade was rebuilt with plainer pillars. Nevertheless, the bases, which were probably the only seats at the time, were left and remain to the present day.

In the South Aisle the East Window was built during the 14th Century and the other two a hundred years later. The exterior window sills appear to be mediaeval tomb slabs.

After the Spire collapsed the Tower was rebuilt in 1620. Some of the stone was probably used in the construction of the Porch on the east side of which a gargoyle still looks surprised at finding itself in such a strange position. The Children’s Chapel was built in 1949.”

[The Children’s Chapel is dedicated to the memory of the men of the village who gave their lives in World War 2. – Other War Memorials in the village can be researched at the sister site to this – “Ruskington War Memorials“.]

Burials in The Churchyard:

Obviously, over the centuries, the number of graves of parishioners of the village who have been buried in the Churchyard, before its ultimate closure in 1883, must have run into thousands.

The painting above, which now hangs in the Church, was done by Thomas Ogden and shows how the Church and Churchyard appeared prior to the restoration of the Churchyard in 1873. (Quality of photo has suffered from reflections off the glass!) The characters shown in the painting, mentioned below, and bearing in mind when they lived locally, probably dates the painting to the later 1850s.

about the History of Churchyard Burials 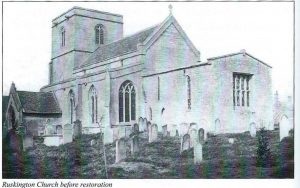 All Saints’ Churchyard – Before Restoration

When writing about the Restoration, Thomas said:

” Through years of mismanagement and neglect the Church Yard had become an unseemly place of ‘hills and holes’, so much so that immediately around the building the soil had in some parts accumulated to a height of 3 feet above the original level, so as to completely hide the fabric. In short it was one of the most unsightly church yards known and strangers passing through the village commented thereon in the Public Papers. ”

A note – originally written on the back of Ogden’s painting, but now re-framed to be included on the front – says this about the painting’s details:

“ This view was taken before the old wall was taken down and the Yard enlarged to its present size. The effigy of the old Priest acting as a coping stone near the large gate. The stumps of the old ‘Stocks’ and one post still standing. Old Tommy Luff is sitting on his stick, smoking his pipe and talking to Mr George Atkin. Within the churchyard is old William Cooling – walking with two sticks. To the extreme left going towards the Porch is old Charles Ridley. The unevenness of the then existing surface of the Churchyard is accurately shown. Signed: Thomas Ogden. “

This photo, in black and white, is, perhaps, a little easier to interpret. 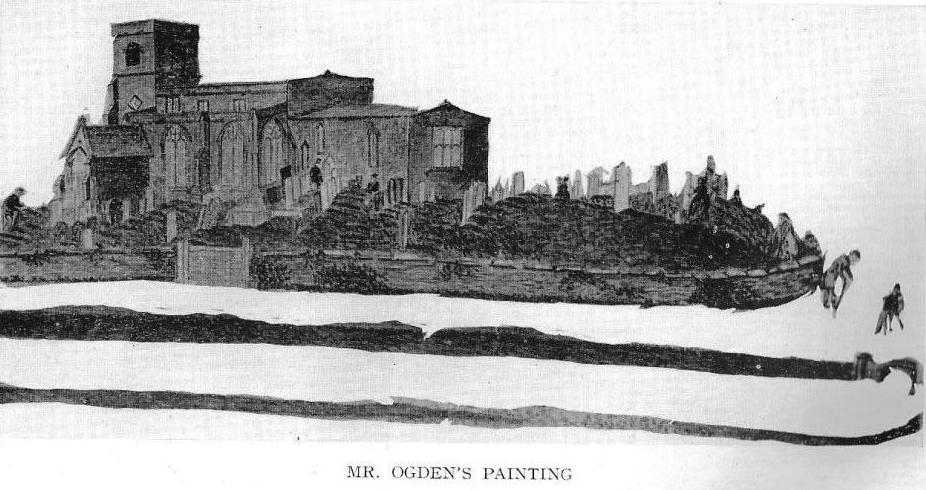 [N.B. ‘Tommy Luff’ could be the Thomas who was born (and died) in Quarrington, but married Eleanor Wiles, a local girl, and lived with her in the village until at least 1851. If so, Thomas was born about 1792 and died in 1869.

All Saints’ Churchyard – After Restoration

George Atkin was probably born in 1805 and died in the village in 1877. He is buried in Grave 47 in the Churchyard.

William Cooling was married to Ann and was born about 1796. He died in February 1877 and is buried in Plot PO45, Sleaford Cemetery.

Charles Ridley was born in Wellingore in 1777. He married a Ruskington lady, Millicent Claypole, who died in 1835. Charles died in the village in 1861.

The Rev. Arthur Myers, M.A. (pictured right) was Vicar of All Saints; from 1870 to 1893 and during this time he took it upon himself to restore and enlarge the Chancel. As part of the rebuilding after the Tower collapsed in 1620, the Chancel was shortened and the roof lowered and made less steep – as shown in Ogden’s painting above. 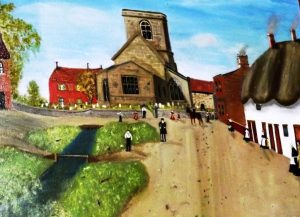 Reverend Myers, however, when rebuilding it, extended the Chancel and the roofs of both the Nave and Chancel were raised to the level as you see them today.

This work was completed  by 1877. Another painting in the Church, from an early photograph, shows these changes, along with the entrance to the School, opened in 1868, next to the thatched cottages.

The road bridge, outside the Churchyard, was built in 1841, although in the foreground one of the fords over the Beck is still in existence.

In 1954 Rev. Arthur Myers’ grandson, Charles A. Myers, compiled a typed ‘memoir’ of his grandfather, which contained details of life and times in the Village during his Rectorship from 1880 – 1893. It includes details of the re-building of much of the Church as well accounts of some of the more ‘notable’ characters in the Village. CLICK – to download a copy of Charles Myers’ account.

Closure of the Churchyard:

According to Charles (see above), his infant brother, Hugh Martindale Myers was the penultimate burial in the Churchyard, after his death, aged 2½, on 13 March 1883, before it was closed to all further inhumations. However, William Ridley, Grave 105, died later in the same month and George Halkes, Grave 143, died on 14 April 1883.

Another source records that “Hephzibah Ogden, the widow of Thomas Ogden, a man of many parts in 19th Century Ruskington, was the last person to be buried in the churchyard in 1883.” Hephzibah died on the 25th April 1883 and her funeral and interment was conducted by Rev. Arthur Myers two days later. However, no grave can be found for her, neither in the Churchyard nor the Communal Cemetery. The Parish Register does bear the accompanying annotation “Last in Churchyard“. The next Parish Register entry is for 4 year old Lucy Arabella Robinson, the first to be buried in the new Cemetery on Sleaford Road, in Grave C.1., on 15 May 1883.

The last 4 months that the Churchyard was open for burial saw seven burials – according to the Parish Register. In addition to Hephzibah Ogden, Lucy Claricoates, who died in early February, is not named among the surviving headstones. 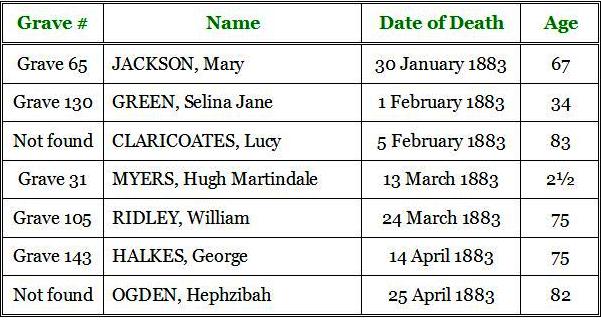 The Last Burials in All Saints’ Churchyard in 1883 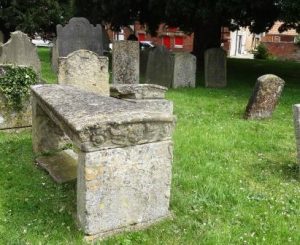 In a survey carried out in the Churchyard of All Saint’s Parish Church, Ruskington, by Mr. R. Wood in 1980, a total of 156 graves were identified by having either a Headstone or some other form of grave marker, e.g. ‘casket’ burials. The details of the Grave incumbents were noted, plus inscriptions and any relevant or inspirational verses.

Four notebooks of Mr Wood’s notes have now been analysed and their findings (which include headstones which survive but are largely illegible) are included in this site. The notebooks were organised around hand-drawn sketch plans of the Churchyard, with each Grave numbered. This system will be used in this site – though readers should note that the number key used bears no reference to ‘official‘ church records.

To locate a Grave in the Churchyard, have a look at the plans on the ‘ Mapping the Churchyard ‘ page. From there you will be able to link to different Sections of the Churchyard with more detailed Plans of who is buried where.

In addition you can search for a particular name: